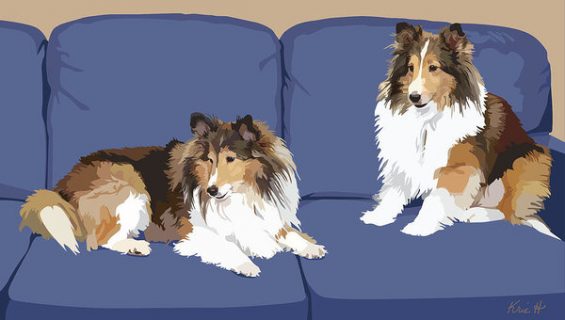 Scroll down for a little “mood music” for this post:

The theme song you’ve just heard is, of course, the opening to Tiny Toon Adventures. It was written by composer Bruce Broughton who also composed the soundtracks to Homeward Bound: The Incredible Journey (and its sequel, Lost In San Francisco), Silverado, Tombstone, Miracle On 34th Street, The Boy Who Could Fly, and The Rescuers Down Under.

For our purposes, however, we share the song because it contains one word that is the crux of our post, and that word is “toonie.” We doubt Broughton had the Shetland Sheepdog in mind when he wrote the lyrics, but as it happens, the Sheltie’s original name was “Toonie Dog” based on the Shetland slang word, “toon,” meaning farm. At least, that’s one interpretation. We came across another source that says “Toonie dogs” were so named because they were kept by people in villages which in the Scots language is “toun, ” a toonie dog being a dog kept in town, and not as working farm dog. That is a bit at odds with our understanding that the Sheltie was most definitely a working dog in charge of herds that were ferried to outlying islands, and in the fall, relied upon to round up the stock and bring them back to the mainland.

The rocky Shetland Islands (where the breed was originally bred)  is the United Kingdom’s northernmost point, but the local dialect is called “Shetlandic,” and is based on Old Scots. In pronunciation and lexicon, it’s more Nordic than other areas of the northeast of Scotland, and, in fact, is a waageng (aftertaste) of Norn, an extinct North Germanic language spoken in Shetland until the 18th century. Interestingly, Scandinavians perceive Shetlandic as a cousin language, recognizable, but strange.