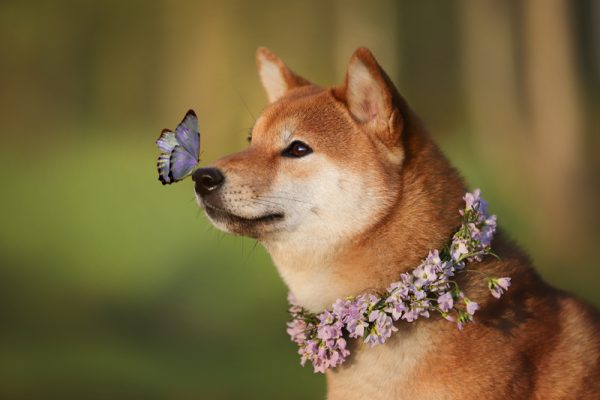 Few images are as captivating as when a butterfly lands on the nose of a dog, but for the fanciers of certain Japanese dogs,  a “butterfly nose” is less charming. In fact, it is regarded as a deficiency in most Japanese working breeds.  This term describes a dog with bright pink spots on his nose leather. The pink patches appear in random locations on the nose, and they can be tiny spots, or nearly the entire nose. A puppy may have these spots until it is half a year old, but it’s considered a fault if they remain into adulthood.

The AKC standards for the Hokkaido, Shiba Inu, and Kai Ken call for a black nose, as does the FCI’s standard for the Shikoku, Japanese Spitz, Tosa Inu, and Kishu (unless it is a white dog). While the Ryukyu Inu is not currently recognized by any kennel club, including the Japanese Kennel Club, the Ryukyu Ken Hozonkai issued a breed standard, and it also calls for a black nose.

Both the Akita and Japanese AKC standards have as a disqualification the partial or total lack of pigmentation on the nose surface, and the Japanese Akita standard identifies this as a “butterfly nose.”  The term for this in the Association for the Preservation of the Japanese Dog is hanakake.