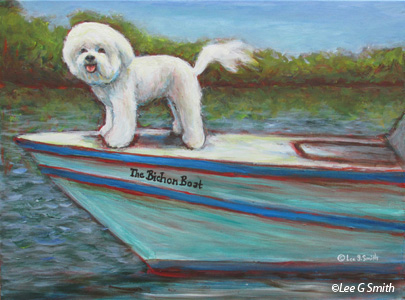 Overhearing this comment, the average person might expect you to be standing with a Bichon Frise, but the stranger on the street is technically correct. Your Havanese, Maltese, Bolognese, Coton de Tulear,  and yes, Bichon Frise, are all breeds in the Bichon family because the Bichon is as much a “type” of dog as a breed. What Bichon breeds have in common is that most are white, though the Havanese is permitted to be all colors and marking patterns, while an adult Coton may have shading on 5 percent of its body, (in a show ring, preference is given to the dog whose coat has the most amount of white, all other things being equal).  Their tails also all have varying degrees of a curve, and they all have drop ears and dark eyes.

There are references to small white dogs living in the Mediterranean over two centuries ago, an important trading area dotted with dozens of port cities. Most cynologists believe that that these dogs descended from a water spaniel known as the barbiche, a name that was shortened to “bichon.” Sailors frequently used the friendly little white charmers as barter (and to control rats and mice on their ships). As the ships stopped at various ports, the dogs were traded or gifted to dignitaries, or given to their one true love, a local girl in different ports.

These dogs were taken all over the world, and so it was that Bichon type dogs developed independently. The Tenerife, the largest of the Canary Islands, for example, became home to the Bichon Tenerife, the breed we know today as the Bichon Frise. It was introduced to Europe in the 15th century by Italian sailors, and it quickly became a favorite among royals.  When Italy was invaded by France a hundred years later, the dogs became spoils of war, and the new favorites of French royals. Spanish seamen also took the dogs along trade routes in ships that carried metal and spices to South America’s ‘New Spain’ – Cuba.  Spanish ships also ventured to the Island of Reunion east of Madagascar, and developing on its own track, these little dogs became what we know today as the Coton de Tulear, and the “Official Dog of Madagascar.”

And so it went.