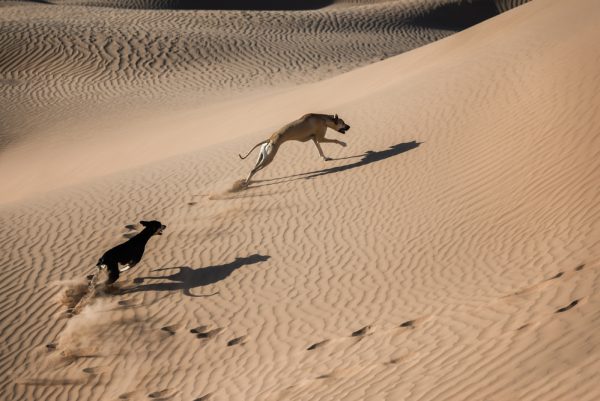 Participants of the AKC’s fast CAT already know about this gem of an activity they can do with their dog, but this post is for people who don’t. Fast CAT stands for Coursing Ability Test; it is a timed straight-line 100-yard dash where dogs run one at a time, chasing a lure.

The AKC has been running Fast CAT races for dogs since 2016, and eligibility to participate is straightforward: Dogs have to be at least twelve months old, and while all dogs can participate whether they are purebred or a mixed breed, they must have an AKC number via the dog’s AKC registration as an AKC recognized breeds,  through AKC Canine Partners (for mixed-breed dogs and dogs ineligible for AKC registration), through the Purebred Alternative Listing (PAL) program, (for purebred dogs that cannot be fully registered with the AKC to participate in AKC events), or through the Foundation Stock Service.

One sighthound we don’t hear a lot about in FAST CAT even though it was recognized by the AKC is 2016 is the Sloughi. Also called the “Arabian Greyhound,”  this is still a fairly rare breed in the United States, but Berbers and Bedouins in North Africa bred the dogs for millennia to course gazelles, jackals, hares, and rabbits.

The site, PetCalculator, analyzed over 60,000 dog speed records from the AKC Fast Coursing Ability Test database, and studied the speeds of thirteen different Sloughis. It found the breed’s average speed to be 26.4 mph, and the minimum speed to be 19.2 mph. The fastest speed on AKC record for a Sloughi was 31.79 mph and was set by CH Ocerico Everest BN RI FDC FCAT CGCA CGCU TKN ATT.

Compared to the running speed of other dog breeds, the Sloughi ranks 9th out of 247 breeds. The fastest breed is the Greyhound which can run at an average speed of 33.1 mph.

If you liked this article, consider buying us a cup of coffee!

Image: Two Sloughis in the sand dunes in the Sahara desert of Morocco/Deposit Stock Photo