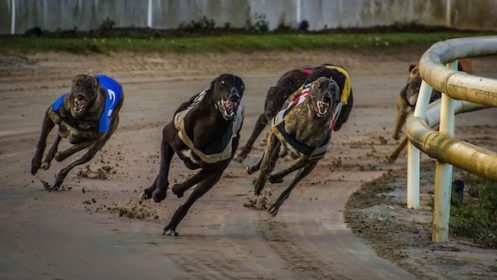 The other day, we shared a post having to do with Greyhound racing, and how Florida, the last big state with numerous tracks voted in 2018 to phase out professional greyhound racing. To our knowledge, once the Florida ban takes effect, only five states will still have Greyhounds racing: Alabama, Arkansas, Iowa, Texas and West Virginia. Four other states don’t have tracks, but dog racing is still legal in Connecticut, Kansas, Oregon and Wisconsin.

We’ve discussed in this space who was the first person to place a bet on Greyhounds coursing, why Greyhounds wear muzzles while racing,  where the first recorded Greyhound race was held, England’s most famous race, and how Greyhounds are able to do what they do (here and here), but we’ve not discussed jacket colors and wagers.

Greyhounds wear “jackets” (or silks) while they race, and the color they wear is connected to their starting position in the gate which makes a difference in their performance.  In essence, a Greyhound’s jacket color illustrates certain racing skills that each dog has, but also, the color indicates its starting position which helps viewers identify the dogs as they’re racing.

In the US, the red jacked is always worn by the dog starting from trap one, the starting position closest to the inside rail. These dogs have prefer to run along the inside of the track, and that makes them known as “railers.” A railer usually needs a good burst of early speed to hold its position in to the first corner and not get over-taken by the other hounds.

A blue jacket is worn by the hound in the Number Two trap.  This spot is usually preferred by dogs looking to get over to the rail in front of the dog in trap one.

The Greyhound starting from trap three wears white, and a green jacket is worn by the dog running out of trap four. Greyhounds who have a natural inclination to run down the middle of the track typically get into these starting positions.  A black jacket is worn by the Greyhound out of trap five, and a yellow jacket is worn by the dog starting from trap six. In Trap seven, the dog wears a green and white striped jacket, the number eight trap dog wears black and yellow, and trap nine wears white and purple. These positions are generally favored by dogs who have a natural tendency to run towards the wide outside of the track.

We conclude with an awe inspiring at nature’s running machine: