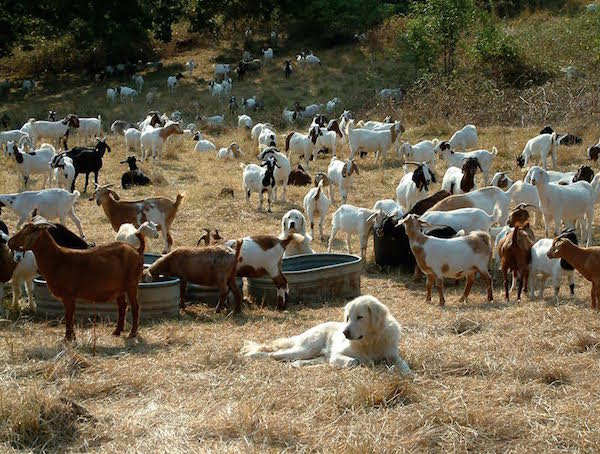 The other day, we talked briefly about the Great Pyrenees’ style of livestock guardian work, and today, we touch upon the Akbash Dog.
The Akbash Dog has a well earned reputation among sheep ranchers in the American west where the dogs work on rangeland, as well as enclosed areas. Like all LGDs (Livestock Guardian Dogs), the Akbash thinks for itself, but unlike a few other LGDs that are known to wander, the Akbash Dog scores significantly high when it comes to staying with his or her livestock.  The breed has an exceptionally well developed maternal/paternal instinct demonstrated by sensitivity and submissiveness to livestock, nurturing young animals, and a fierce protectiveness when those animals are threatened. They have been known to form strong attachments to their people, but also to llamas, cattle, sheep, goats, alpacas, horses, poultry and exotic birds, and even to deer. Anyone considering an Akbash Dog would be wise to remember this.  The Akbash may also be a bit more dog aggressive than other guardian breeds, another thing to consider if adding one to one’s life.
The Akbash Dog’s coat is easier to maintain in heavy bush and thicket country, and the breed, particularly ones with a naturally shorter coat, does well in hot and/or humid climates. Akbash Dogs with a bushier coat will do well in colder climates because of dense undercoat, but the breed’s coat, while always white, can very between individuals in terms of length.
A strong response to predators, heat tolerance, long legged build and fleetness of foot, and a reduced aggression towards people led one USDA Animal Damage Control study to name it one of the top three best Livestock Guardian Dog breeds in the United States.
As a companion dog, however, there are characteristics that should be considered before adding an Akbash Dog to a home environment. These qualities are addressed by Diane Spisak, a breeder of working Akbash Dogs since 1988, in her article,“The Akbash Dog as a Companion Dog:”
If you are interested in Livestock Guardian Dogs, here’s a little “light” reading on the subject from 2001
Photo by Sharon Hoyt of Sheepfields Big Mac in the back, and Sheepfields Woodrow, aka “Goofus” in front. “Mac” and “Minnie” are littermates who are with about 600 goats and 250 sheep on about 20 acres.