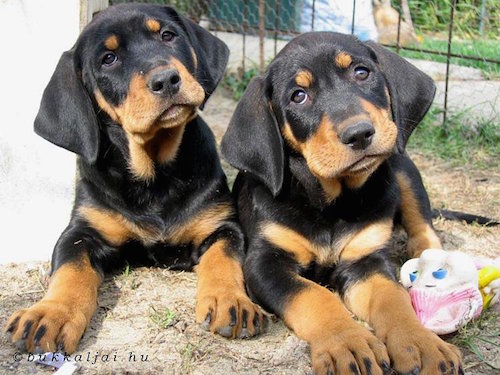 Politics can often lead to a bad ending for dogs, and we’re not just referring to bad dog legislation.

The Hungarian–Romanian War in the early 20th century nearly lead to the total demise of the Transylvanian Hound, an ancient breed that had existed in Hungary for thousands of years. Because of Romanian fanaticism, the Romanian government ordered the mass killing of the dogs seen as a symbol of Hungarian occupation. The breed was nearly obliterated, and had a precious few not survived, dedicated breeders wouldn’t have been able to revive the breed in the 1960s.

The breed is still regarded as an extremely rare hunting dog, even in Hungary, and it’s almost unheard of in other countries. In its hey day, it was highly favored by Hungarian royalty while hunting for bears and wolves in the mountains of Transylvania, in large part because of its unusually good sense of direction. Varying terrain of the country lead to two versions of the same breed being developed, one with shorter legs than the other. Over time, the longer legged dog prevailed.

This is a “driving hound” which means that the dog drives game towards a hunter, but he doesn’t attack or kill it. Today, the breed is still used to hunt wild boar in Transylvania.

We’re happy to report that in 2016, the owners and a dozen of their Transylvanian Hounds – said to be just a portion of the total number of the breed in the Bay Area – gathered in San Jose, California. Still, there are less than one thousand Transylvanian Hounds remaining world wide, nearly all of them in their native Transylvania and Hungary.  Owners are keen to preserve their breed (as are we!)  and point out how warm, affectionate and easy-going the dogs are with children and cats.  To see more of this gathering, click here.

As for their status as a recognized breed, the Transylvanian Hound was recognized by the United Kennel Club in 2006, and is currently listed as an FSS breed (Foundation Stock Service) with the AKC.

Image of TH puppies by @panthercreeklab via the AKC with consent