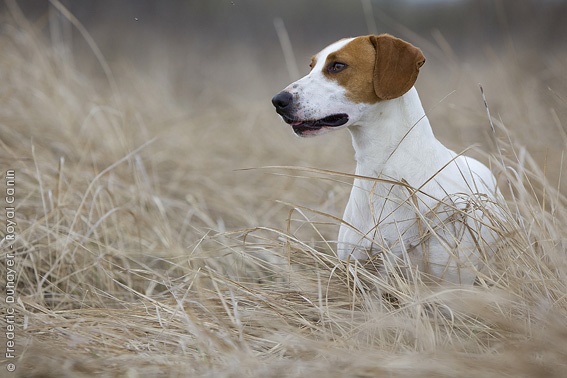 We’ve written several posts that point out the relationship between people who have chosen a religious life, and several breeds.  Whether these individuals created, protected, developed or wrote about them, the only reason we know about some of these breeds (let alone have them around today) is because of monks, clergymen, and/or nuns.

We add to the list the Istrian Short-haired Hound, a breed from Croatia descended from a very old European type of scenthound.

The first description of the breed originally known as Istarski Kratkodlaki Gonič was given in 1719 by a Roman Catholic bishop from the Archdiocese of Đakovo-Osijek.  In a manuscript that Bishop Petar Bakićhe penned, he wrote that the breeding of the Istrian Hound was already known before the 15th century.

Artistic images bear this out.

A column seen in the Franciscan monastery in Dubrovnik shows four dogs of the old type of this hound, while a painting from 1474, “The Bow of the Three Kings,” appears in the cemetery chapel next to the village of Beram.  And finally, at the bottom left corner of an altar painting found in the church of the Holy Francis in Zadar is what appears to be an ancestor of today’s Istrian Hound. The painting is known as, “The Mother of Mercifulness.”

The Istrian Shorthaired Hound is thought to be one of the oldest hound breeds developed in the Balkan region, if not the oldest. The Istrian Coarse-haired Hound came later in the 19th century when short-haired Istrians were bred with French Griffon Vendeens to create a longer haired hunting hound. Despite the Istrian’s antiquity, a stud book wasn’t established until 1924 to document which dogs were considered to be this breed, a quarter century from their initial recognition by the FCI in 1949. It took another quarter century until the first breed standard was published in 1973, and yet another before it the United Kennel Club acknowledged the breed in 2006.

While both the FCI and the UKC consider the breed to be a Croatian dog, both Slovenia and Croatia have laid claim to it. We like to think this is because the Istrian is an exceptional hunter used to track hares, foxes, and rabbits; like its prey, the dog is very quick and has considerable endurance.  That said, the breed isn’t well known beyond its borders. Though we’ve seen reports that an Istrian Coarse-Haired Hound was seen at a dog show in Vienna in 1886, it evidently didn’t create a buzz among spectators or judges. For our part, we find the breed very attractive with its fine, smooth, snow white coat broken by lemon-orange markings. A clean, long, narrow head gives it an air of nobility

Image: This photo was originally found uncredited on Royal Canin’s website but has since vanished. It’s also been spotted – unattributed – on a number of websites including Pinterest. We’d love to credit the dog and the photographer and will happily do both upon receipt of information.