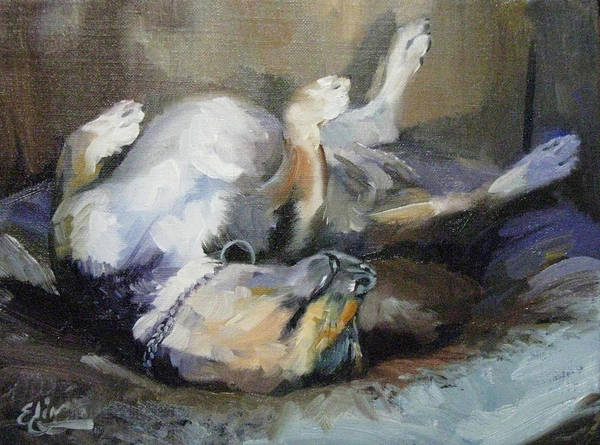 The slang term, “cankles” (a combination of the words ankle and calf) describes legs in which there is little definition between a person’s lower calf and ankle. This may be the result of an injury, medication, diet, or the genetics of naturally larger bones, muscles, or tendons that we’re born with. Regardless, it’s an unfortunate pejorative, but not a new one.  In the 80s and 90s, the forerunner to cankles was “bench legs,” and while there is no counterpart in dogs for obvious reasons, there is still a connection to be made.

Hundreds of years ago,  Gilbert du Motier, aka the Marquis de Lafayette, sent dogs from France to George Washington. They were called “Old Virginia Bench-Legged Beagles,”  but there is a more recent use of the term, and it is “bench-legged feists.”

Feists were small hunting dogs descended from the terriers that immigrants, and especially British miners,  brought to the United States. Little doubt that these dogs included crosses with other terriers to improve ratting ability, but some were crossed with a variety of sighthounds to increase speed, and others with hounds that improved their scenting abilities. Because some of these dogs were either short legged, wide in the front like a bench, or had front legs with turned-out feet, they became known as bench-legged feists.

There is a purebred breed, however, that includes “bench legged feist” as one of its historical names. Its other monikers are bob tail, bench fice, wry leg, Type B Rat Terrier, and Short-legged Rat Terrier, but you may know the breed as the Teddy Roosevelt Terrier. Some of its various nicknames are descriptively accurate because the Teddy is a true “short legged” breed modified by a chondrodysplasia gene identified as “CDP.” Indeed, these terriers are required by their standard to have an elbow to ground height of approximately 1/3rd of wither height.

Like the Rat Terrier, Teddies were often referred to as feists, but while the breed shares a common early history with the American Rat Terrier, the Teddy is closer to the ground with low-set short legs, is more muscular, and has heavier bone density. It is not the same breed.

It seems fitting to conclude with an excerpt from a poem written by Abraham Lincoln,  “The Bear Hunt,” which includes the short legged fice:

“The tall fleet cur, with deep-mouthed voice,
Now speeds him, as the wind;
While half-grown pup, and short-legged fice,
Are yelping far behind.”

Image: “Zonked Dog Sleeping” by Elin Thomas is available as fine art, and in lifestyle and home decor items here