The podencos of Spain are related in that they share a common trunk with other podencos of the Mediterranean area, and in our series on these different breeds, we’ve covered thus far the Andaluz, Maneto, Canario, Orito, Malagueño, and Campanero. We turn our attention now to the Podenco Galego (or Galician) found throughout Galicia in the northwestern area of ​​the Iberian Peninsula, but mainly in the provinces of Pontevedra and Ourense. The Galego is one of four traditional breeds of the region, the others being the Can de Palleiro, the Guicho (or Quisquelo), and the Perdigueiro Galego. 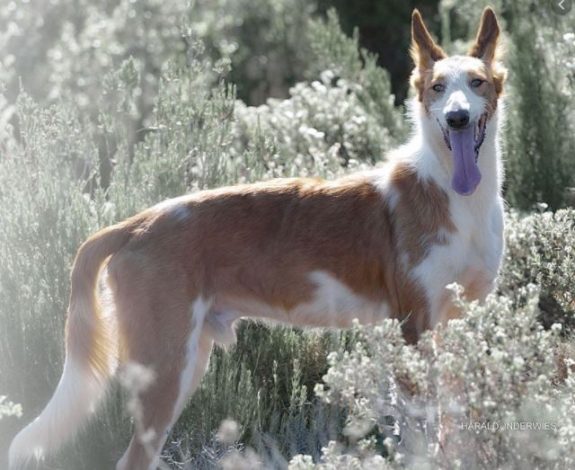 hearing through large, highly-mobile prick ears. The Galego, however, also brings cunning, endurance, and wicked rapid movements to his task. Some have been trained to chase fowl, and fewer still dedicated to partridge; most are talented rabbit and fox hunters.

Larger than the Maneto, but smaller than the Camapanero, the Podengo Galego specializes in hunting fur bearing animals. Color-wise, they are very uniform – White with cinnamon coat in shades from sand to reddish. There are also short and smooth, as well as longer-haired varieties.

Some have described the breed as distrustful and of a nervous nature, and thus many are employed as house guard dogs quick to announce the arrival of a stranger. They are the lucky ones. Podencos used to hunt for a season are typically treated horribly because of ignorance and superstition. By some estimates, around 60,000–80,000 podencos are abandoned (or worse) every year because they are deemed worthless after the season. Spanish law does not protect them as they are considered to be “tools.”

There is a Facebook page devoted to the Podenco Galego, but the last entry was in 2015. It may still be worth a visit to glean more information.
In the future, we will be sharing how these dogs can be helped, but for now awareness is a good start.