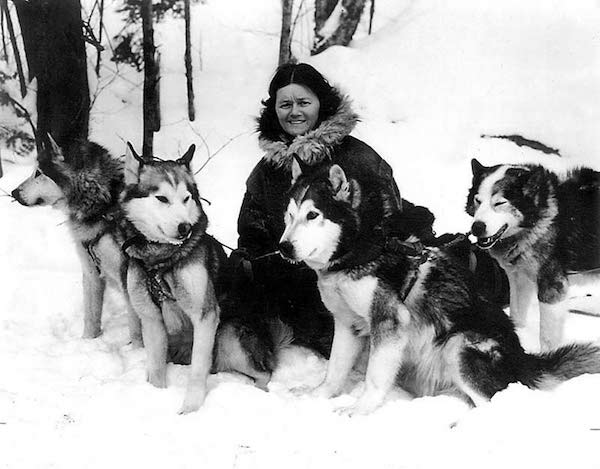 It can confuse a “newbie” just getting into dogs to read about bloodlines, lines, or strains, and wonder what the difference is between them, but they are essentially the same thing: All refer to a type within a breed that has been developed by an individual from a specific kennel. We need not look further than the Alaskan Malamute in which the Kotzebue, Hinman, and M’Loot lines explain this, but each was important to the breed.

The Malamute as we know it today is credited to Arthur T. Walden, but other individuals also played big parts, and in this post, we focus on Eva “Short” Seeley.

Back in 1923, Eva was a young teacher who chanced upon a newspaper article about a winter festival in Gorham, NH at which Arthur Treadwell Walden’s Chinook dog sled team would be appearing. Eva felt sure that a sled team would be a big hit at her own local carnival, so she arranged for two teams to appear there, and one of them was Arthur Walden’s.

Part of the attraction of having a sled team appear was the chance to ride on one, and Eva took advantage of the opportunity. She ended up on Walden’s sled, and as they slid over a snow covered golf course, the lead dog saw a cat and off the team went flying! When Walden was forced to overturn the sled to stop the team, he injured his hand, but Eva was absolutely thrilled to pieces. The bug was planted, as was the beginning of her professional relationship with Walden. She and her husband, Milton, became regular visitors to Walden’s kennel, and in time, the couple would take over the kennels. They were now part of the mushing world.

It was in this world that Eva met a large freighting Alaskan Malamute named, “Rowdy of Nome.” Eva was smitten and sought out more like him – dogs usually found in the Norton Sound area of Alaska.

Enter “YukonJad,“or “Jad” as he was known. Jad had been given to musher, Leonhard Seppala, who was more interested in Siberian Huskies than he was in a slower freighting-type dog like “Jad.” Some sources say Seppala gifted Jad to Eva, others suggest that Eva bought the dog, but what is relevant is that Rowdy and Jad were the prototypes of the dogs the Seeleys wanted to breed: Large, heavy boned, and strong with plume tails and erect, low set ears. Rowdy and Jad were the first of what would come to be known as the Kotzebue line of Alaskan Malamutes. Dogs in this line had consistent type and size, good heads, good muzzles, and a wonderful expression. Many felt that a good “Kotzebue” bred into any line would improve it.

Little did Eva know back then that she would be responsible for getting AKC recognition for the breed.  All Eva had originally wanted was to have her Kotzebue line declared an official breed, but the AKC required her to prove that the breed actually existed, that there were sufficient enough dogs with a uniform appearance to represent the breed, and that there were enough of them to guarantee that the breed could move forward.

We should mention that not everyone held Eva Seeley in high regard. We came across a source that painted an unflattering picture of her as a political, controlling individual ruthless in her dealings with other dog people. As Eva died in 1985, she cannot address the charges, but there’s no taking away from what she accomplished. The Kotzebue line was the only strain of the breed to receive early AKC recognition. There were other lines that we’ll discuss in subsequent posts, the Hinman line and the M’Loot line.

Image: Eva “Short” Seely with four of her Alaskan Malamutes circa mid-1930s, photo attributed to the AKC

2 thoughts on “The Kotzebue Line”