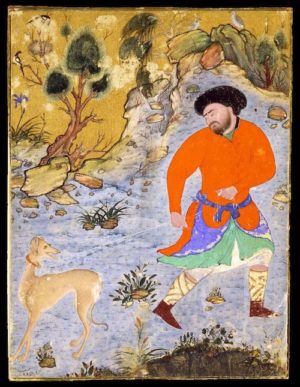 A serious interest in the Saluki will inevitably expose one to the words, “Desert bred,” “ROO,” or “COO” Saluki, but what do any of these terms mean?

Desert bred is obvious, but the acronyms, COO and ROO are more cryptic until they are literally spelled out: ROO is the Region of Origin, and COO is the Country of Origin. The words aren’t necessarily interchangeable, and here’s why: Throughout the ages, Salukis had been brought to the West as the odd rarity or exotic dog, and it wasn’t until Lady Florence Amherst began a serious breeding program in 1895 with a pair of Salukis from Lower Egypt that there was a sustained presence of the breed in England. Some officers returning from the Middle East also brought with them Salukis, and these dogs were known as “imports.”

A few decades later, and Salukis imported from the Middle East (which, for Salukis, was an area that stretched from Egypt to Iran) came to be called, “desert bred” dogs. As Brian Patrick Duggan, author of Saluki: The Desert Hound and the English Travelers Who Brought It to the West, told us, this ultimately was an unsatisfactory term as it could technically include Salukis bred by Westerners, or put another way, Salukis not the result of an Arab breeding program. Desert bred was also a bit misleading since the terrain in the traditional hunting grounds of the Saluki also included mountains, steppes, and rocky deserts. This was when the term, Country of Origin, or COO gained acceptance.

Saluki fanciers mindful of history, however, commenced to use another term, “ROO,” or Region of Origin. Why? Because in the Ottoman Empire, “countries,” as such, didn’t exist, but were modern products of how the Brits and French drew up a map of the area after Turkey was defeated in WWI.

Western Salukis descended from those initial Country of Origin (COO) imports, and when COO lines have been bred in the West longer than a few generations, some breeders speak of “Desert/COO descent Salukis. Other fanciers regard lines bred in the West for four or five generations as quite Western.  One source we found opined that Salukis that are part Western and part 50% COO might better be called, “desert/COO descent Saluki.” Ultimately, Western and COO Salukis are the same breed, the term merely denotes that the dog in question is a direct COO import or a direct descendant of such an import.

For the remainder of our post, and for the sake of simplicity, we’ll refer to these dogs as COO Salukis.

Because they continue to be brought into the west, a number of questions came to mind including “why?” The first dogs came as pets returning home with their owners, but in time, savvy breeder with an eye on the bigger picture saw the importation of COO Salukis not only as a way to diversify a closed gene pool, but as a means to preserve the breed in a Middle East that is changing quickly. Between wars and the need for a hunting hound diminishing, it was a valid consideration.

Some Saluki fanciers are of the opinion that COO hounds are better hunters, or at least, better than dogs bred in the West since breed recognition in 1927, and the dogs are brought in for that reason. That said, Direct COO Salukis are ineligible to compete as they don’t have AKC registration. With the AKC’s sanction, the Saluki Club of America works in partnership with the Society for the Perpetuation of Desert Bred Salukis to evaluate and register COO Salukis, and if they breed true, the third generation from the import may be registered with the AKC and subsequently shown at dog shows.

We wondered, too, how these COO dogs differ, if at all, from our “western” hounds. Some are of the opinion that COO Salukis may be more primitive, have less “flash,” and look like what they are: Hunters. Some tend not to have as much feathering, and because some of the dogs come from villages where they are use to catch meat for the stew pot, emphasis is on the hound’s function: Hunting; conformation is taken into account in the context of the hound’s function as a good hunting Saluki. Some of the dogs also have tribal branding or cropped ears, particularly if they are from the Syrian region. That aside, it seems that these dogs compete equally well with their western brethren.

Our deepest gratitude to Brian Patrick Duggan, author of Saluki: The Desert Hound and the English Travelers Who Brought It to the West, for taking the time to answer our questions on this topic.