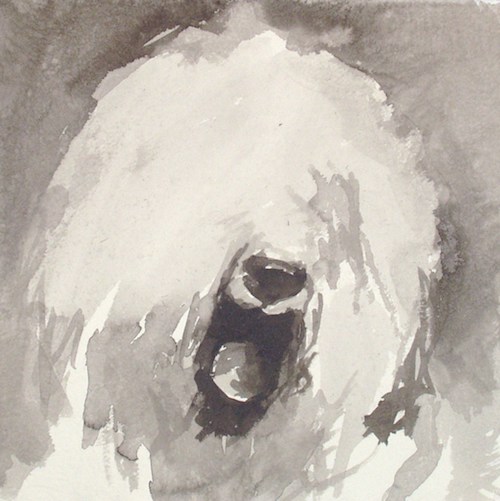 In 1877, two dogs described as “sheepdog, short-tailed, English” were registered with England’s Kennel Club, but long before that, shepherds and farmers knew this dog, and called it simply, “the Shepherd’s Dog.”  Descended from a variety of European herding breeds, in particular, the Beardie and the Russian Ovcharka, Shepherd’s Dogs had already developed a distinct type by the 19th century. As proof, we need only to go back to 1810 and an essay written about livestock. It included a description of a dog that was easily recognized as a Shepherd Dog:

“...with a very long coat of soft hair and distinguished by being without tails. Their color is black or blue, with a white ring about the neck, a bald face and the belly and feet are white….. The county of Dorset lays claim to this breed of dog and they are certainly to be found more generally in that country that in any other, but they are most frequently seen at Smithfield attending the London drovers. The hair of these dog is a necessary protection again the severity of the weather as they have to lie by the fold side during many cold days while the shepherds is dressing the flock.”

The dogs came to be associated with the South Downs region in Sussex where they were used as drovers to move cattle and sheep to market, and even for helping transport New Forest ponies, natives of the mountains and moorlands of the British Isles.  Because they were so often seen with their livestock at London’s Smithfield Market, as well, they were sometimes called, “Smithfield dogs.” When a tax was introduced only for pet dogs, Shepherd’s Dogs routinely had their tails docked to prove their working status and be exempt from the tax. It was the origin of the breed’s other nickname, “bobtail.”

But wait, there is another theory about that bobtail nickname, and it predate the story above. According to one source, land holders didn’t tolerate losses of game by hunting dogs in their forests, and a forest law mentioned in literature (1598-1796) held that dogs used for work, but not to hunt, were exempt from taxation. The tails of the dogs were docked in the belief that balance and mobility would be compromised in a bob-tailed dog, and they would be unsuccessful hunters.

Today, of course, we know these canine clowns as Old English Sheepdogs. The breed made a serious entry into British conformation shows in 1865, and by 1873, they were given their own separate breed classification with the Kennel Club. Four years after that, the first registrations were recorded. It took less than 25 years to see a whopping fifty OESs entered at a Kennel Club show.

As for America, the Old English Sheepdog was accepted by the AKC in 1888. Surprisingly, the United Kennel Club waited until 1948 to recognize the breed, surprisingly only because the UKC has historically recognized breeds before its counterpart has.